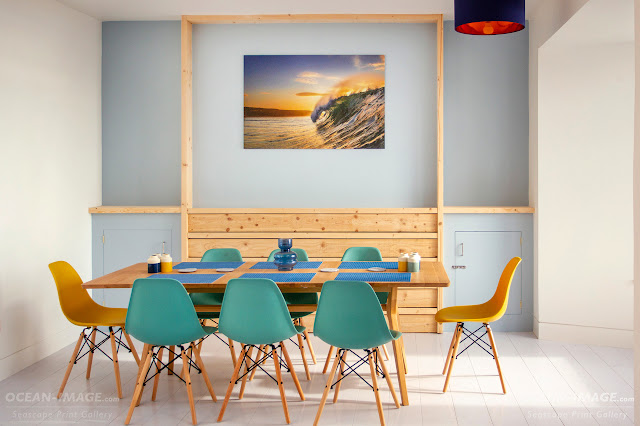 What to put up on your wall Here at Cornish Seascapes we believe in putting a seascape print up on any wall space that's available!  But we would say that wouldn't we, so here's a few ideas from an amazing whole building design project we helped with, which was completed last year.    There were some very specific areas that needed an image, and having chosen a certain picture, the rest of the room was designed around colours picked from the photos Straight edged Aluminium prints fit well with the architectural lines.  The image is UV printed directly onto the panel which hangs flush  with the wall, so it doesn't protrude into the room. In a holiday setting it's also great not to have to worry about glazed picture accidents Seascape bedroom prints Wood framed larger XL panel, about 2m x 2m  For stairways, lobbies or hanging walls Colour matched bedroom interior  Large aluminium print from  Ocean-Image.com Wall hanging wave print for seaside cottages  or business pr
Post a Comment
Read more

How to Take a Great Photo 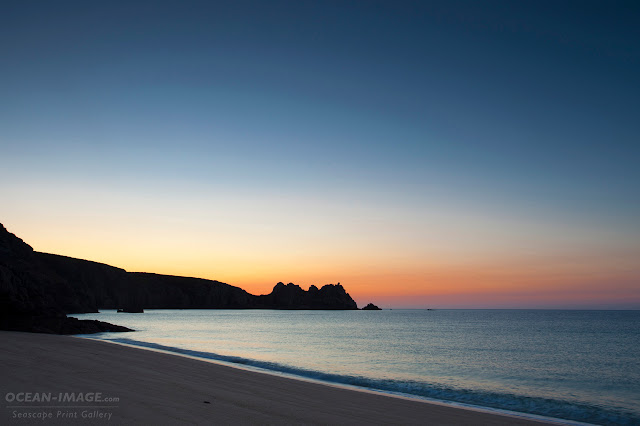 F8 and Be There The phrase 'f8 and be there' is an old press photography adage explaining that the sure-fire way to get a great photo is to set your camera aperture to f8, and make sure you're in exactly the right place when that dramatic something happens!  Although 'f8 & be there' is a simplistic aphorism, a witty joke giving you only two parameters to get a great shot, those two central ideas can be used by photographers of all skill levels to achieve a good result.   For landscape photographers this means finding the right spot to set up your camera & tripod, at exactly the right time of day.  As you know, sunsets happen over the last half hour of the day, so you need to time your photo trip to be in place and ready for that half-hour.  An hour early and the scene is too bright, an hour later and you've missed all the fun.  Timing is key. As is being in the right spot. The luxury of planning where to be is something that press phot
Post a Comment
Location: Cornwall, UK
Read more 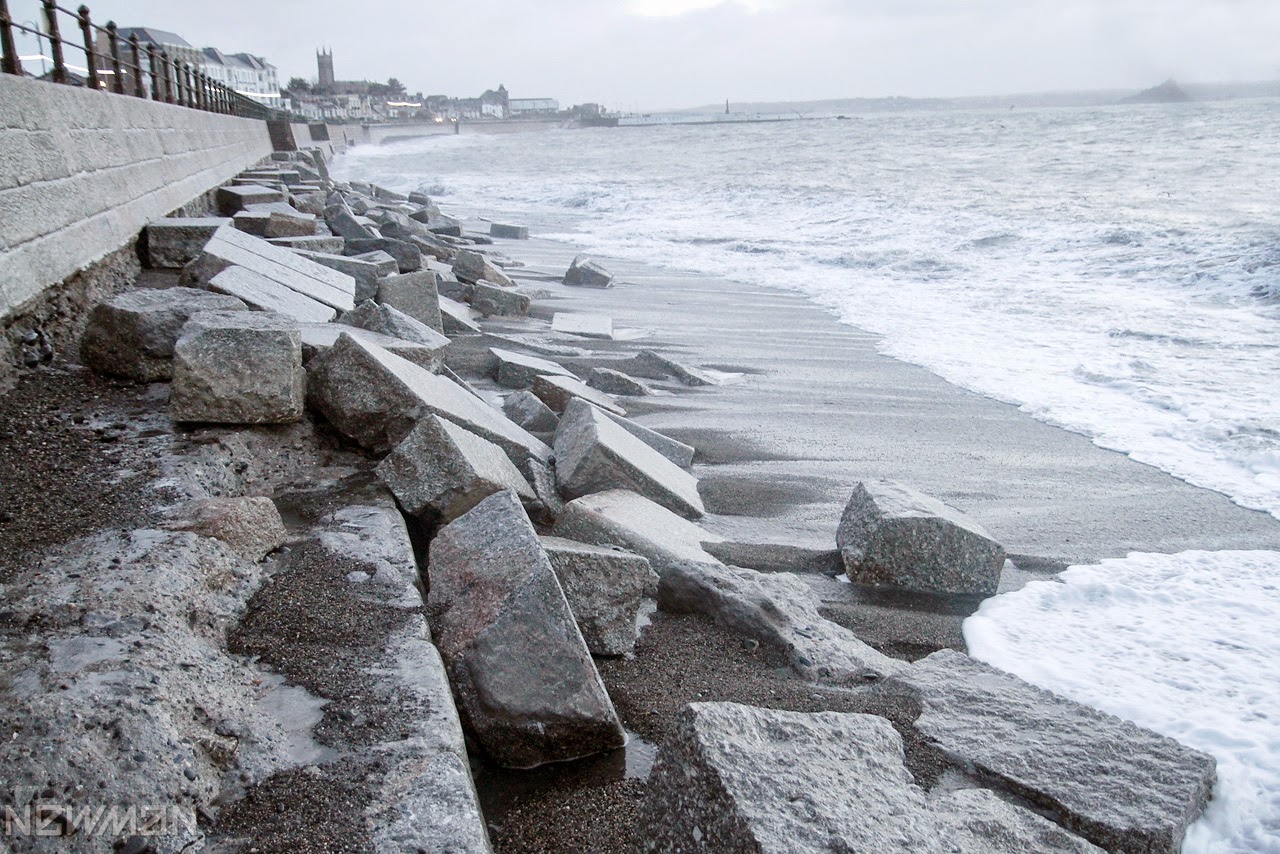 Earlier in the year I photographed the Valentine's Day storm ripping apart Penzance promenade, even though it is constructed of two-ton granite blocks. The swells were heavy enough to break up the jigsaw construction and scatter hundreds of them along the shoreline.  Valentine's jigsaw destruction The blocks were recovered from the sea bed and craned onto the top of the prom where they have rested all summer, awaiting someone to come and replace them. Someone genius enough to unscramble the pile and rebuild this jigsaw. Storm damage to the old railings Jigsaw pieces So yesterday I went down with a camera to see how the crane and workmen have been piecing it back together over the past few weeks.  Each block has been measured Main keystones laid Flat blocks laid down between key stones and held in place with steel bars drilled through the block. Holes drilled in the blocks so they can be lifted  The engineers studied
Post a Comment
Read more 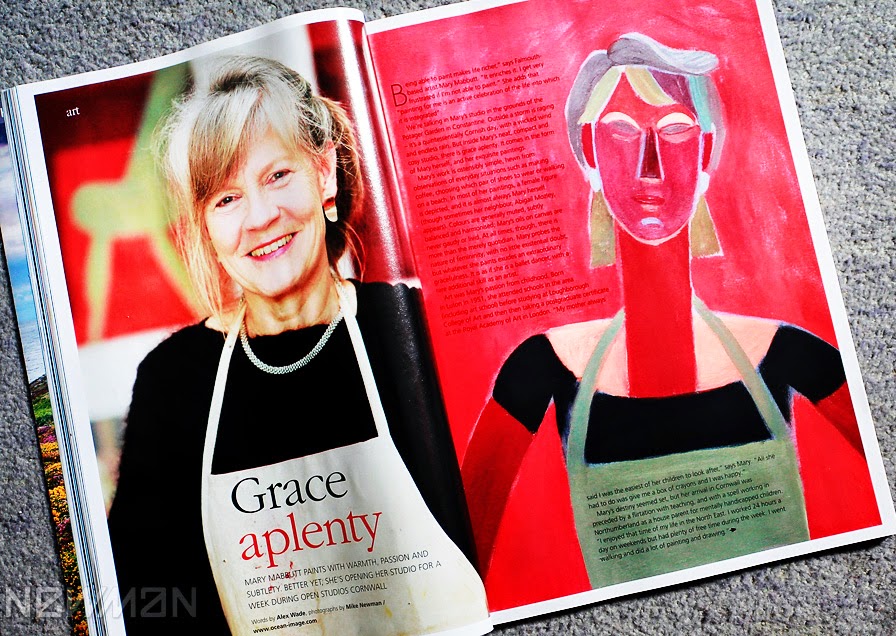 As ever it's been a while since I posted here, so 'Hello!' and thanks for checking back. There has been busyness in the photo world with a variety of local shoots. Artist of the Month shoots for Cornwall Today magazine always provide interesting people, frequently with amazing art works, and I feel privileged to be able to photograph this aspect of the creative Cornish life.  Mary Mabbutt, Cornwall Today, May 2014 Rachael Kantaris, Cornwall Today, June 2014 I usually shoot quite a few pictures when we (writer Alex Wade and I) visit the artists, of which sometimes only three will make it on to the printed page, so it's great for the other images get an outing too. You can now find the rest of the shoot in the magazine's new Artists Gallery . So much for culture, for God's sake tell us about the extreme sports! I hear you cry. Well the surfing end of the extreme sports spectrum is alive and well in Cornwall, with Spring time blue swells aplenty thu
Post a Comment
Read more

I had been out on a windy, rainy, grey and overcast day to do an interior shoot. Naturally the interior had to have a 'sunny, summery feel'.  Presumably that was the reason it was commissioned in mid December then. Plus it was incredibly urgent, needed immediate post-processing and sending to the client immediately after that, if not sooner. A-Frames  So much, so normal. But I knew there was a decent swell running which, if the correct bit of shelter from a difficult wind could be tracked down, would undoubtedly turn up some decent looking waves. With only a brief window of opportunity due to the shortness of the days at this time of year, looking was all I had time to do. Empty, but no time to surf it The First Law of Surfing being what it is, I presently came across several sheltered spots which were firing. Solo pilot Having driven around looking at all the places I couldn't surf, I ended up in St Ives with just enough daylight left to make the in
Post a Comment
Read more 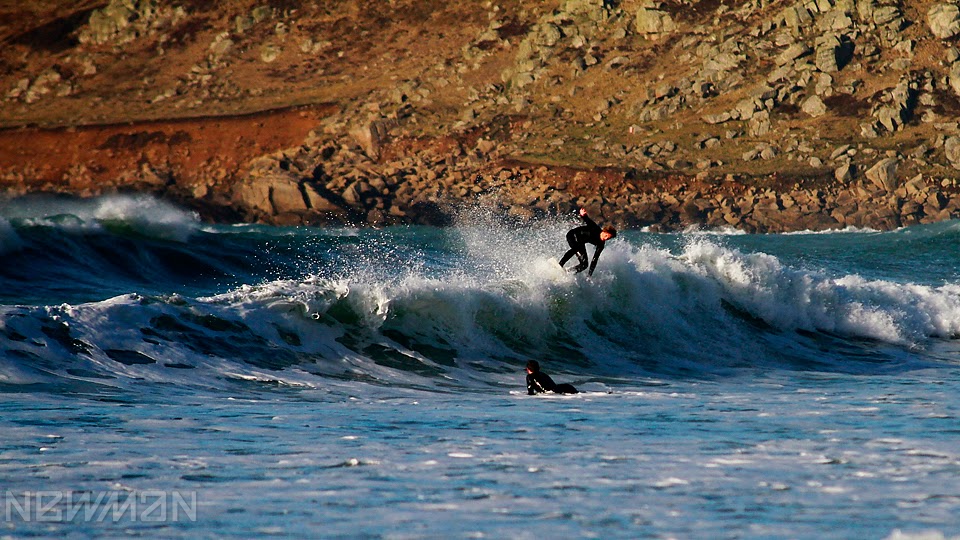 Yesterday was a fantastic day down here in Cornwall, the second sunny one after a massive storm that smashed sections of Penzance promenade, the Jubilee Pool and Newlyn Green. On Sunday the promenade was almost as crowded as on Pirate Day with locals and visitors alike inspecting the damage to the prom and pool.  A sort of Dunkirk spirit pervaded the atmosphere. Waves in the 'ride-able' size now  At Sennen it was the same story, the cove filled with half-term holiday makers strolling in the sun, having a look at what all the fuss was about in the national press when '200ft Waves' were reported crashing into the cliffs at Sennen.  Today there were decent surf-able waves, the sunshine making Sennen look more like its normal inspiring self. Apart from the sand, that is. The bed rock of a beach There is a distinct lack of sand on the beach at the moment, the giant scouring swells of the last weeks having shifted it out into the bay, an oceanic action repeat
Post a Comment
Read more

A Reef History of Time 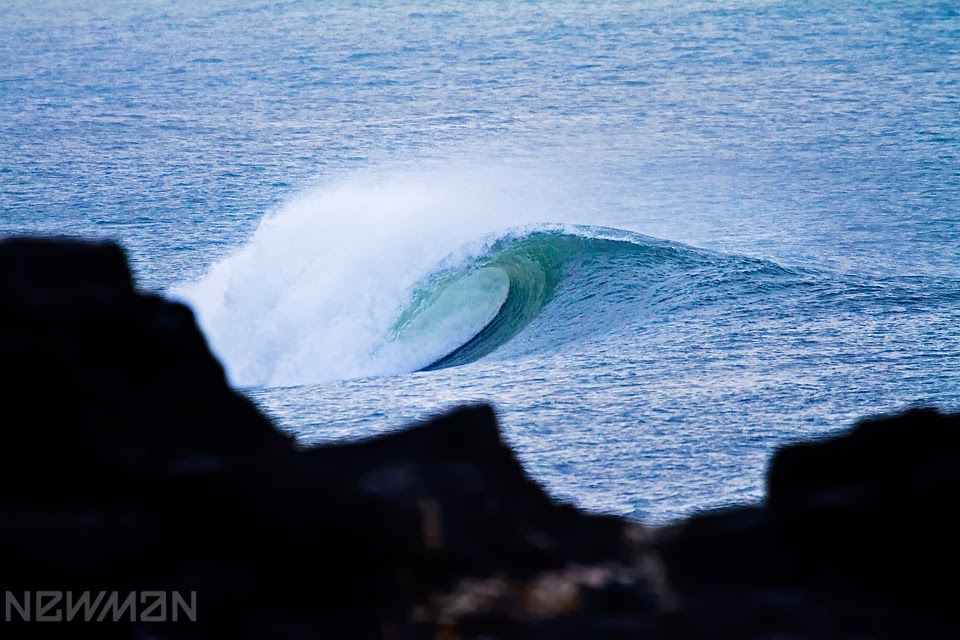 It was morning, and work timings had unusually left me free for a couple of hours. That would normally mean the surf was onshore, or blown out, or flat or something, adhering as it usually does to the First Law of Surfing . But not today. Blue Rinse Today looked like a bleak, grey, midwinter day with (from a brief glimpse of the sea on the school run) a weak looking swell and the wind threatening to go onshore. But I had time. Time to take pictures. So I trawled along the coast looking for surf or seascape images, but found very little. Until I came to the reef. Which, oddly, seemed to be firing. Fryer  Several locals and some of the Aggy crew were making the most of a small day before the expected 'Hercules II' storm at the weekend. An acceptable peak Empty Dan Joel Mole getting critical Captain Fryer on a set wave A chill wind cut through the grey pall that hung over the break, warmed slightly by the relaxed atmosphere. Styling
Post a Comment
Read more
More posts